The Celtic people believed that the liminal times of dusk and dawn held the potential of magic and possibility and perhaps that is one of the reasons that the seasonal celebrations begin at dusk preceding.  So, Bealtaine begins as the light wanes on April 30th.  Light a bonfire, have a family picnic or a romantic interlude outside and welcome the season of Summer.

Bealtaine is an occasion when the fairies of the Otherworld are said to be most active, so it is a wonderful time to leave them a gift of milk, honey, butter or whiskey, some of their favourites. Create a fairy house with the kids and leave offerings from Nature. Your garden will flourish in return. 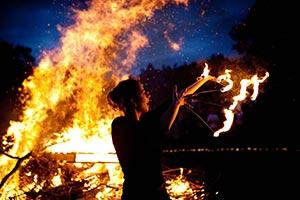 Fires hold special significance at Bealtaine, symbolised in our Bealtaine Garden by the twin flame bog oak structure, the copper flames leading through the standing stones and the fire circle in front of the throne.

In ancient times a huge bonfire was lit at the geographic center of Ireland, at Uisneach in County Meath. Communities would gather on surrounding hills, waiting to see the light of the fire and from that their own fires would be lit until all the hills and plains of Ireland were ablaze with a ceremonial Bealtaine fire. Cows would be driven between two fires to purify and protect them as they were led to their summer pastures. Incantations and spells were recited as young men and women hurdled over fires, asking for fertility and union with a beloved.

Another liminal element that the Celtic people celebrated was dew, being neither rain nor river or ocean. Liminal aspects are those which are neither one or the other, liminal being a threshold or in-between space, offering alchemy, magic and transformation. A tradition on Bealtaine morning, the 1st of May, is to wash your face in the dew. This will wash away any mask that is hiding your true essence and allow your inner beauty to shine forth.

In more recent times, May Day became a time to celebrate Mother Mary (and Mary of the Gael, Brigit). Every village would boast a May parade and many homes would create a May or Mary altar, decorating it with flowers from the meadows and blooming hawthorn boughs.

These traditions and rituals are an opportunity for us to remember and connect with the rhythms of not only the year but also with life as a whole. May you find one or two ways to celebrate Bealtaine within your family and your community, and receive the richness of our Irish heritage and the wonder of Nature.

You are warmly invited to join us for a special celebration of the Celtic fire festival of Bealtaine (May Day) and the coming of summer on Sunday, 2nd May, 7-9pm. This is a time to re-emerge from the darker half of the year and open ourselves to the growth, warmth, joy and abundance of summer – a transition that feels particularly poignant in this pandemic year.