Who is Brigit & what are her traditions for Imbolc? 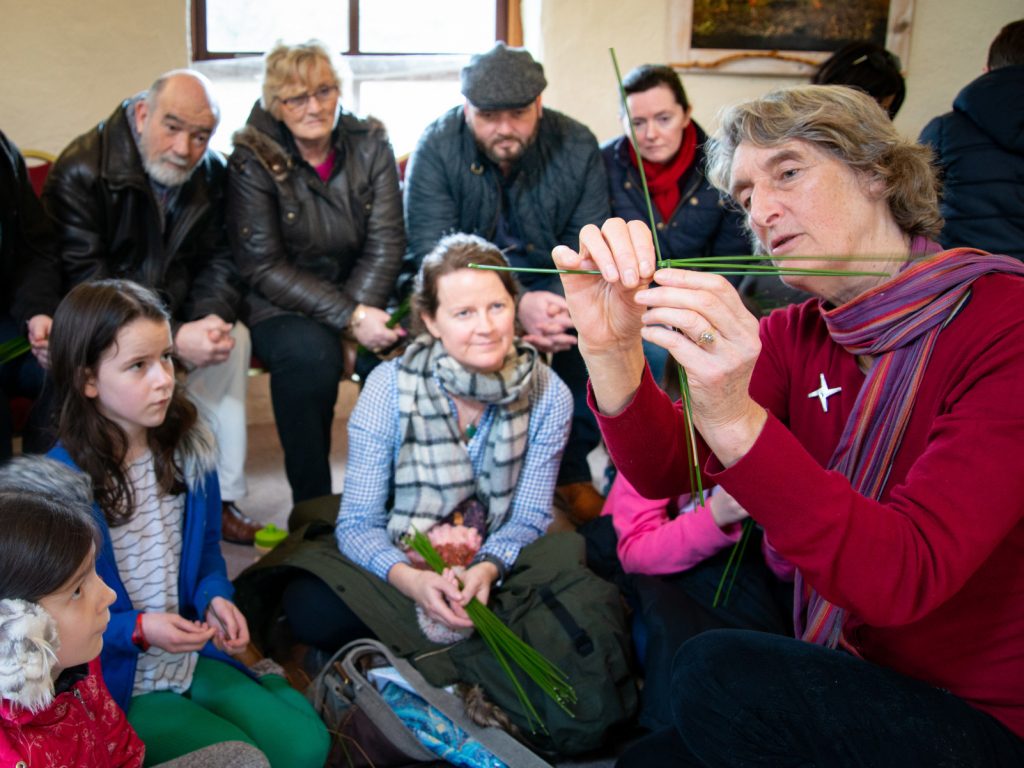 Who is Brigit & what are her traditions for Imbolc?

Light grows and the wind blows just a little warmer at the old Celtic festival of Imbolc, which marks the seasonal shift from winter to spring. Imbolc is celebrated on 1st February and is also Brigit’s Day, the feast day of St. Brigit. As with each of the four seasonal celebrations on the Celtic Wheel of the Year, there are traditional ways to celebrate Imbolc and Brigit.

Brigit, in pre-Christian times, was a triple goddess of healing and midwifery, of poetry and of smith-craft and the forge. She was a goddess of the Tuatha de Danaan tribe. Myths and stories allege that Brigit was born into human form in the early 5th century on 1st February from a pagan chieftain and his Christian servant-woman. Brigit established a monastery in Kildare and may or may not have been made a bishop of the Church by St. Patrick depending on the story you know or read. Brigit is one of the three patron saints of Ireland, along with St. Patrick and St. Colmcille.

Excerpt from “A Song at Imbolc”

– a girl who gifted her father’s sword to a beggar for bread,

we, who have wounded the engendering seas and earth,

beg you to teach us again, before it grows too late,

your neglected, painstaking arts of nature and of care”.

The story of Brigit by Jenny Beale

Of the patron saints, Brigit has the distinction of being a protector of hearth and home. Crosses dedicated to her are traditionally woven on or around Brigit’s Day to represent her presence and protection over the household. Rushes are collected to weave into either the most common four-arm cross or a three-arm cross which may signify the elements of earth, sea and sky or many variations thereof. The cross from the previous year is burned or returned to the Earth.

The Arrival of Spring

Snowdrops, tiny white flowers that nod bashfully to the Earth, are a symbol of Brigit and represent her warming breath upon the land. Their presence portends spring’s arrival. Dandelion is another flower and herb of Brigit and of springtime. As a healer, she may have used this herb as medicine as well as food. Its bright yellow blossom symbolises Brigit’s fire, incorporating both her aspect as goddess of the forge and as Christian saint protector of the hearth and home.

Placing a blue cloth outside on the evening of 31st January, Brigit’s eve, is another long held tradition. This cloth is meant to collect the essence of Brigit as she moves over the land and can be used throughout the year as a representation of her healing presence. Midwives may also use this cloth to invoke protection during childbirth.

Making butter was a common chore, even as recently as 50 years ago, and ties in with Brigit and her companion, a white cow with red ears, that would produce limitless amount of milk (until misused by a greedy chieftain, of course). Today butter-making might be considered part of the burgeoning homesteading movement and making butter on Brigit’s day is a fun activity especially for the kids.

Brigit as a Herbalist

Brigit was a herbalist, both in her pre-Christian as well as Christian aspects and dandelion was one of her favorite herbs for healing and nourishment. The following receipt is a delicious way to enjoy the first dandelion blossoms. Fry them in your handmade butter.

Optional items to add for sweet fritters: spoonful of honey and 5 ml of any of the following: cinnamon, cloves, cardamom or nutmeg. For savory fritters add fresh herbs like thyme, rosemary and oregano plus more salt, pepper and a pinch of chili for extra heat.

Dandelion flowers will close within about 20-30 minutes after being picked so it is important to make the fritters immediately upon harvesting.
Mix dry ingredients then slowly add the milk and beat in the egg. Add the sweet or savory ingredients, as desired. Dip the flower blossoms into the batter, coating well. Fry until golden brown. Best if eaten immediately.

To celebrate the arrival of spring and the coming of Brigit, we are hosting a series of in-person and online events. Join in special celebratory afternoon with a guided meditation, by Zoom for our overseas friends, or visit the Garden for a free Brigit’s Cross-making and Brídeog workshop. See all current events here.

– Written by Tonja Reichley who is a herbalist, student of Celtic heritage and pilgrimage guide. Learn more at dancingwiththewildcom.