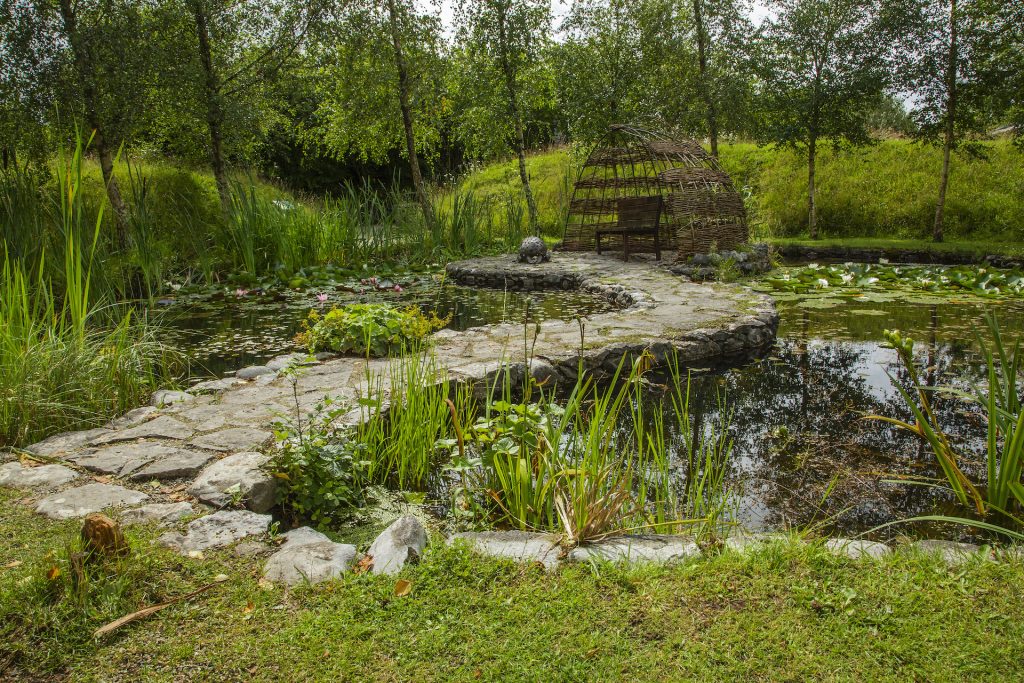 The festival of Samhain (pronounced Sow-en) or Halloween falls on October 31st and marked the beginning of the yearly cycle for Celtic peoples.

This was a time of death and the promise of re-birth, a time for stillness and reflection. It was understood that in the dark silence comes whisperings of new beginnings, the stirring of the seed beneath the ground. In the Samhain Garden the long bank in the shape of a sleeping woman represents the earth resting for the winter. Her body shelters a still pool with a female figure cast in bronze resting on an island. The pool is enclosed in a ring of birch trees, reflecting the stark simplicity of the season. This is a place to be still, dream and prepare for the movement of spring.  In summer, the earth woman wears a dress of wild flowers and grasses.

Imbolc (pronounced Im-ulk) is the old Celtic name for the spring festival on February 1st, now St. Brigit’s Day. The birth of lambs and the first snowdrops herald this season of new life as the land re-awakens and growth begins again.

In the Imbolc garden the path leads through wildflower meadow and orchard trees to a children’s glade with its delightful basketwork swings. In the sunken garden, a carved triple spiral outlines the stories and symbol of Brigit, Celtic Christian Saint and pre-Christian goddess of the land. 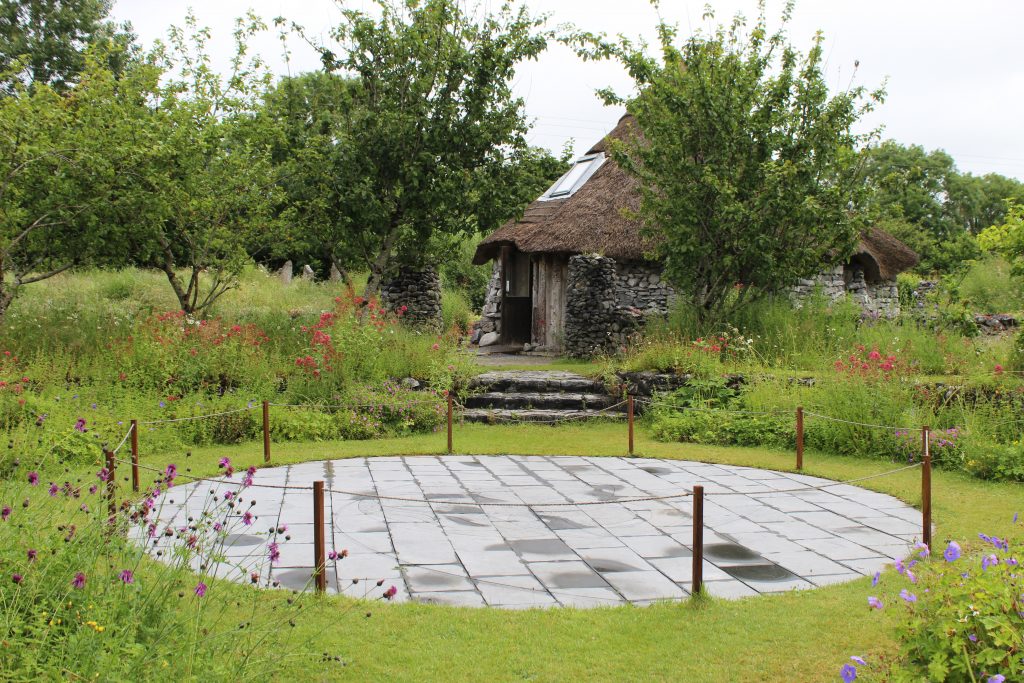 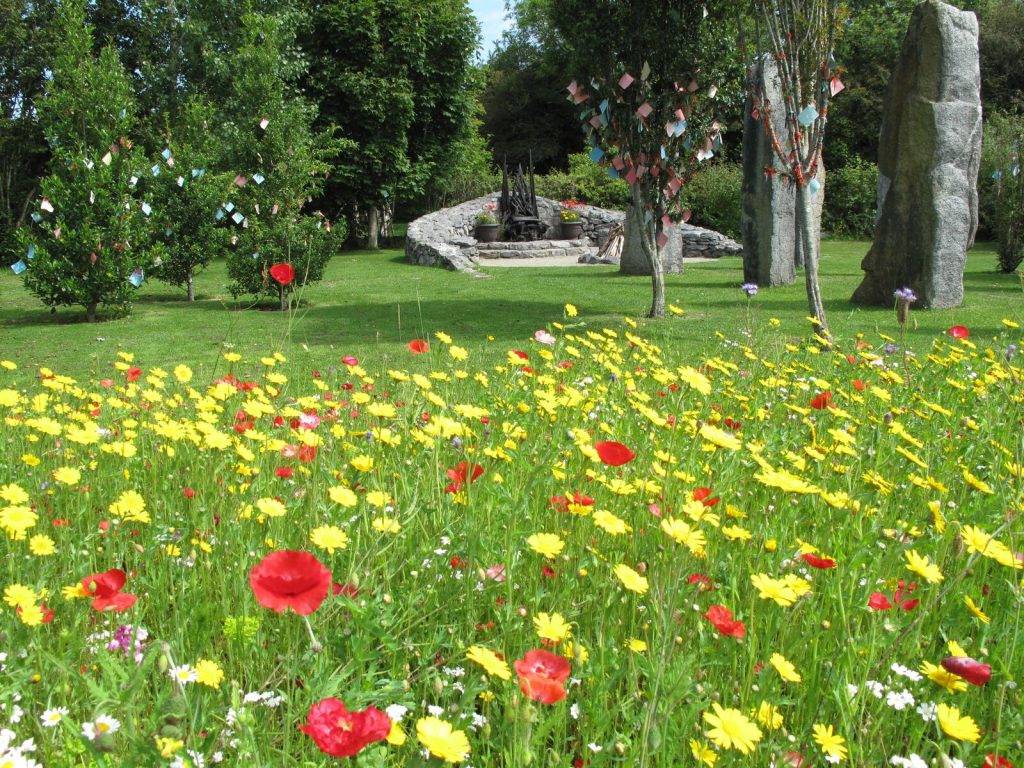 The great fire festival of Bealtaine (pronounced Belt-an-a) or May Day celebrates the bright half of the year and the coming of summer’s warmth. This is the time for sexual awakenings, marriages and the adventures of young adulthood. The lovers theme is represented in the Flame Figures sculpture, and in Diarmuid and Grainne’s bed, a grassy hollow facing the sun and surrounded by simple wildflowers for the mythical lovers.

Bealtaine is a time for celebratory fires and in the Garden the fire runs from the Flame Figures through copper flames set into the processional way between the standing stones, to the ceremonial fireplace in front of the bog-wood throne. Here, the young adult can claim their personal power and sit as King or Queen in their own life.

The festival of Lughnasa (pronounced Loo-na-sa) in early August marks the beginning of the harvest and the transition from summer to autumn. Named after Lugh Lamh Fada, the hero of the mythical Tuatha de Dannan, it is a time of plenty and celebration.

Mounds represent harvest baskets and the constellation of Orion, which some Celts associated with Lugh. Stone beds in spiral shapes stand to each side and host an abundance of culinary and healing herbs. Two interlinked stone circles make spaces for feasting and dancing. As we approach the end of the cycle it is time to reflect, give thanks and celebrate all that has come to fruition.
Three yew trees stand outside the exit from Lughnasa, symbolising the moment of death. The cycle is now complete, and the possibility of re-birth beckons as a new cycle begins. 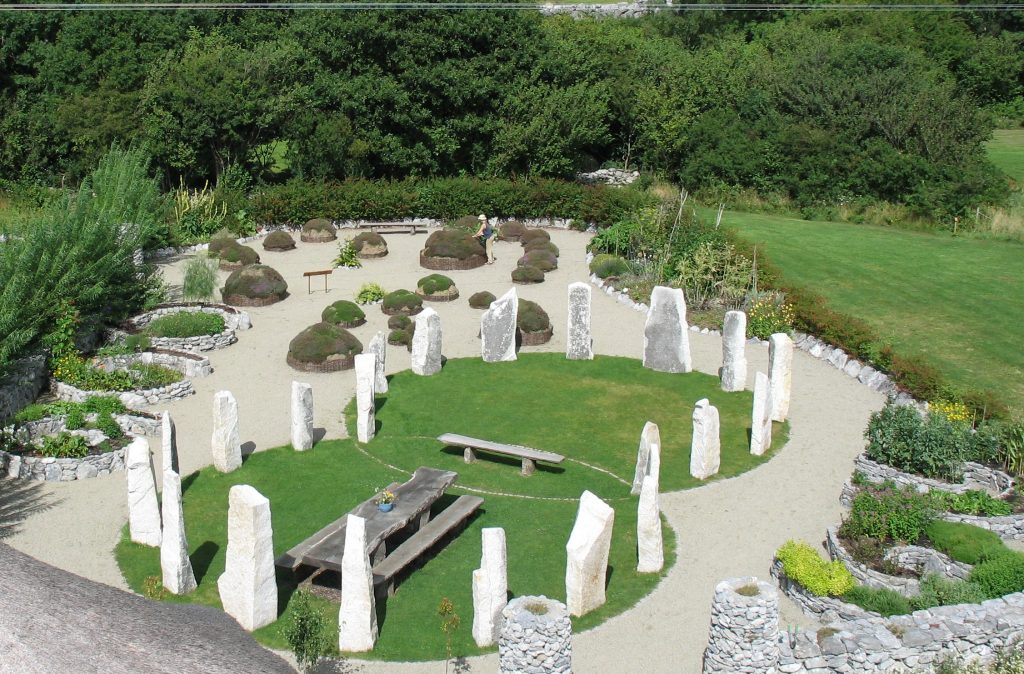