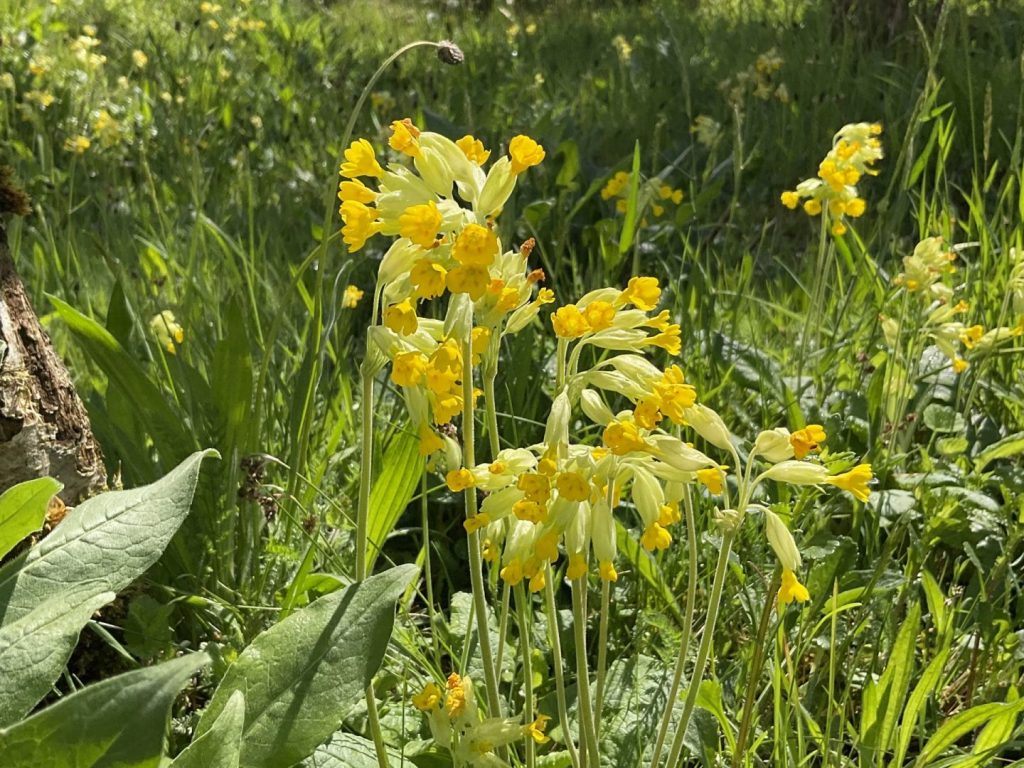 Looking across the Imbolc Garden this beautiful May morning, here in Brigit’s Garden, Galway, we are lucky to have a hundreds of Cowslips growing. This is a native Irish flower that comes back year-in, year-out and belongs to the family Primulaceae (yes, a cousin of the primrose).

For a while there, it had declined due to modern farming practices but thankfully its making a comeback. It will grow on fairly poor soil so avoid the fertilisers and you will welcome this beautiful flower.

Another name for the Cowslip is “Herb Peter” or the “Key Flower” and its true – it does resemble a bunch of keys. The story goes that St. Peter, in charge of the keys of the kingdom of Heaven, heard a rumour that people were using the back door in order not to be judged at the gates. In anger, he dropped the keys when he heard this. They fell to earth and there grew these glorious flowers. This is the Christian version but before that it was linked with Norse Goddess Freya.

This was the original Crème de la Mer – it was once thought to hold a secret recipe to beautify the completion. The secret remedy for blemishes of the completion was to bathe the face with the expressed juice of the flower.

It was also used to cure insomnia. Cowslip petal tea is sedative and soothing to the mind, good for nerves and the go-to plant before you fall into bed.

Cowslips were once eaten in salads and their leaves made into delicious wine. Cowslip tea is good for lung health, bronchitis, coughs and tickles of the throat.

Of course, we all like to forage and gather ingredients for tea and potions but be mindful that this plant is recovering from low numbers. Not only that but Cowslips are important for wildlife, their flowers an early source of nectar for various insects including bees, beetles and butterflies such as the brimstone.